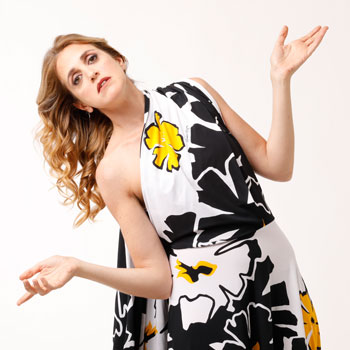 So here I am… As you can see with a laugh, a story and invention, every time I am on this stage and do a Play I realize that I am made of Theatre. Theatre is my temple, my substance, my time is The Time for Theatre and I am the one that decides that time. Theatre: a river that overwhelms me and I am that river, a tiger that devastates me and I am that tiger, a fire that consumes me and I am that fire.

Ippolita is an Italian actress from Milan. In 2009 she graduated to the Italian National Drama Academy “Silvio D’Amico” in Rome. Since graduation she works in numerous theatrical plays and taken parts in numerous Italian movies. She become popular in Italy with the character “La Dodi” from the movie of Luca Miniero “Welcome to the North”. She realized, for Pedro Almodovar, a short film on the character of the italian singer Mina Mazzini. From 2012 she have created a new theatrical format to entertain people for private parties and dinners. “TEATROACASATUA”. During this hilarious shows, Ippolita take inspiration by two amazing actresses and playwrights: Franca Valeri & Franca Rame (Dario Fo’s wife), queens of the Italian comedy. In Italy “Il teatro in casa tua” is such a successful format that she performed it more than 100 times in front of hundreds of laughing people. She decide to bring this activity in New York with the name “Theatre in your kitchen, from Italy to New York”.